Your UML diagram Your ready-to-use code 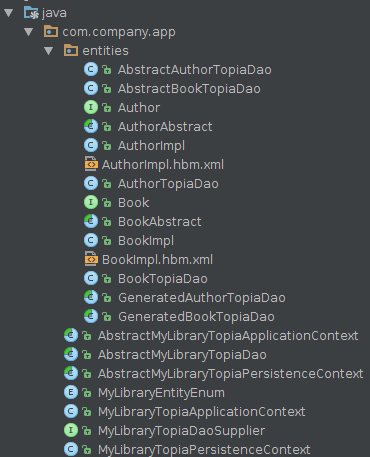 100% of the CRUD code is generated so you can focus on writing code with true added value.

Get started fast: only few lines of code is needed before you can start querying 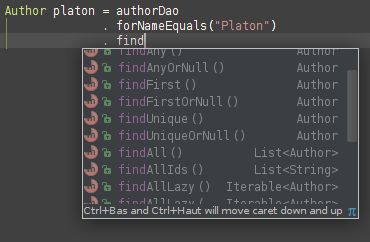 An object-oriented API for quick-and-easy querying with a friendly auto-completion. 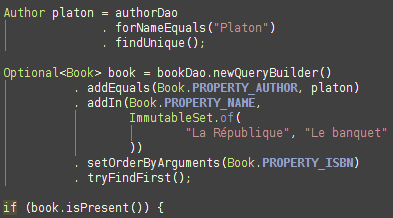 ... which allows you to also do more complex stuff (filtering, nullity, pagination...)

Easy access to underlying infrastructure (pure SQL querying, Hibernate session) because sometimes, you need to get your hands dirty to deal with complex, hard to perform database operations

ToPIA stands “Tools for Portable and Independent Architecture”, it’s our try to provide developers with a persistence framework which is

We rely on a MDD approach. The developer has to describe in persistence model in a UML file and ToPIA do the rest.

We made ToPIA and we use it everyday in multiple projects because we were not satisfied with the existing solutions.

We built ToPIA with many strong rules and we think most of the available solutions does not follow them:

How does it work?

ToPIA relies on EUGene for code generation. ToPIA provides EUGene with templates that to generate entities POJO, DAO implementations and few other things.

Most of the time, we use Eugene maven plugin, so the generated classes are generated along the build and made available for compilation in the classpath and readable just like plain code in your IDE.

To ensure extensibility, ToPIA itself and all the generated code is designed to provide hooks (so override can be used to change any behavior). Also, we use Generation gap design pattern: all the generated code is disposable and separated of the hand-written code. You will never lost a piece of code by regenerating. If Eugene finds that a file already exists in your source, it assume that you wrote it yourself to fit your need and this class generation will be skipped.

Why should I use ToPIA?

You should not use ToPIA in the following case:

I’m convinced! How do I get started?

Discover how to get up and running with ToPIA